Last week and Facebook relaunched MTV’s Real World via its Watch Tab. A few months ago, Instagram introduced IGTV, focusing on long-form creator videos. It’s clear that social is in an all-out battle to own the mega enterprise that has become mobile video viewership. And rightfully so; mobile video viewing accounts for 75% of digital video views and social networking is the #2 use of a mobile device after audio. It’s only natural that these two forces combined could take over the entire mobile landscape.

But are we really ready to watch shows on social?

When you look at the numbers, it’s clear that watching episodic, traditional-TV programming on social networks is still nascent. But the intent is there. People do appear to be ready to watch their favorite shows on social. In fact, eMarketer found that 47% of 18 to 24-year-olds would do just that.

However, social networks are struggling to find their niche in the on-demand video viewing world. Take Facebook Watch for example. Though viewership has increased, going to the Watch Tab still isn’t a habit of its regular users – about 50 Million people watch about 1 minute of Facebook Watch content a month. For reference, Facebook has over a Billion active users, so this represents just 5% of its network. And while there’s promise with IGTV’s focus on creators, it hasn’t maintained the success of its early weeks in the app store, with sharp declines in app downloads week over week.

In a world where…

…why hasn’t it clicked for any social platform other than YouTube?

It’s the content. Up until now the episodes and content just haven’t been that amazing. Yes, New England was enthralled by the Facebook Watch show Tom [Brady] vs. Time, but holistically the options presented by the networks have failed to stand out. They are simply regurgitations of shows that already exist on YouTube or on other channels.

If we can take anything away from the rise of Netflix and Hulu, it’s that the shows have to be nothing short of captivating. They have to be The Handmaid’s Tale shocking, Making A Murderer buzzworthy, or Master of None hilarious. If you want to change a user’s behavior from causally finding videos in-feed to going to a social network as a destination for episodic content, that content has got to be good.

And this isn’t just our theory. Facebook has done its own study to understand what TV Viewers and Streaming Viewers prefer and the content itself is #1 on that list: 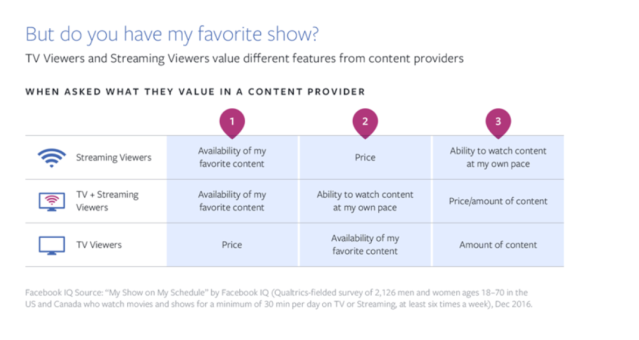 For this reason, we actually predict that Snap Originals may create a halo effect for the entire category. With Originals, Snapchat took the time to partner with publishers to find writers, producers, and actors that will make its videos binge-worthy.

For example, the 12 originals they’ve announced leverage the same talent that brought us Stranger Things, Friday Night Lights, and even Keeping Up with the Kardashians. The new show Class of Lies comes from the mind of one of the writers on Riverdale. These are creators who have developed some of the most popular shows for the Millennial and Z generations. When you put some of the best film/TV talent together with the perfect format, there’s bound to be magic.

In time, this magic will have a trickle effect on viewership for the rest of the platforms. If we’re used to watching shows on Snapchat, how long before we’re used to viewing all of social media as a destination for episodic content? It didn’t take that long for Stories to catch on, either.

We’ve seen this before. According to Adweek, Netflix is having a “halo effect” on traditional cable shows. Riverdale saw live-plus-7 (the live airing plus seven days) ratings jump 60% in season two.

In summary, the concept of the social original isn’t going anywhere. Success is inevitable in this category, and as advertisers we’ll be remiss if we don’t start to develop our own muscle memory. We must begin understanding what works and why. So when Instagram, Snapchat or any of the platforms start winning Emmy’s, we won’t be shocked, and our brands will be at the forefront.