Social TV is changing the world. Okay – that might be a little too strong of a statement. But the reality is that social tv could very well be the television’s antidote to streaming services, Netflix, and even the high and mighty DVR.  Why? Because it’s changing the way we consume programing. It’s definitely changed my television watching habits.

If you’re a little confused, I’ll break it down for you. People tweet, post updates on FB, and blog starting the minute their favorite program airs. Tweeps use special hashtags to ensure that they’re a part of the conversation. And now, at least for me, it’s almost a crime to not follow a hashtag along with a show, game, or political event.

Why? Because I want to know what others are saying, what they’re thinking, how they’re reacting. It’s a virtual “water cooler” that you don’t have to wait until the day after to converse around.

As we all stopped watching our shows in real time or began multitasking while watching TV, advertisers and networks started getting scared. There used to be a time when there were few TV channels that everybody watched quietly, with no distractions. How can we reach our target consumers? How do we keep our viewers engaged?

A popular historical reference comes to mind – FDR’s Fireside Chats. Though I wasn’t around in the thirties or forties, I do remember stories of families crowded around their radios to hear his coined, “Good evening, friends” speeches. In fact, Roosevelt’s Fireside Chats attracted more listeners than the most popular broadcasts of the time. There’s no way it couldn’t have been the next day’s topic of conversation.

In this era, we’re lucky that we can chat back and forth during our Presidents’ addresses. We can comment on his tie, his political statements, and whether or not our vice president is on the verge of falling asleep. And in doing so, we’re all coming together in front of our TV sets and paying attention. We’re listening to the words spoken and watching action scenes with our eyes widened.

We know that social media has changed the way we consume media. But, who would have ever thought that this technology would bring us back together akin to Roosevelt’s radio addresses? Well, it’s happening. And advertisers, brands, and networks are finally realizing that by leveraging social media, a 30-second spot can extend way beyond the television frame.

I can’t wait to see what advertisers have in the works for this Sunday’s Super Bowl. In fact, it’s been reported by lostremote.com that every major Super Bowl media investment has a social tv component. Smart for the brands and fun for the consumer. This Super Bowl Sunday is going to be HUGE, and not just for my fellow New England fans. I’m predicting that the social chatter during the game breaks all precedents and saves the almighty commercial from becoming obsolete.

My challenge for you is to get involved. Follow along with the hashtags within commercials in Hootsuite or Tweetdeck streams and join in the conversation. Use NFL Huddle to keep track of all of the updates from players, hosts, and the media before, during, and after the game. If you’re a social media nerd like me, you’ll be happy you did. 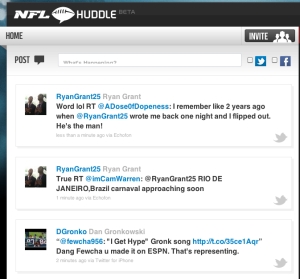